Once Upon a Time Slot

Once Upon a Time is a 3D video slot game developed by NetEnt. The game is ambitious, offers an intricate — and skippable — video intro, and plays on the classic fairytales that we all loved as a child. Once Upon a Time is playable in a free arcade mode, has a lucrative paytable, and offers enough variety to keep you coming back on a regular basis.

Once Upon a Time provides a humorous take on the classic save the princess story, and it uses a cartoonish art style that’s quite effective. The music and sound effects are all quite good, but they play non-stop, even during idle periods. During long play periods, some players will find the music annoying, but fortunately, there’s a mute sound button in the upper left-hand corner of the screen.

You can demo our Once Upon a Time slot game without any limitations right here:

Play Once Upon a Time for real money and get up to $3,000 in bonus casino chips!

Once Upon a Time plays a lot like a 2D video slot game at first and during spins. It’s after the spins, however, that it shows off its on-the-reels 3D elements, which all make it very easy to see how you’ve won or lost. The game has nine unique symbols as well as number of special ways to win in addition to the 30 standard win combinations on the reels. The princess symbol is the standard jackpot symbol; she pays out 500 coins, so if you hit that symbol on all squares, you walk away with 15,000 coins.

How to Play Once Upon a Time Slots

Once Upon a Time has five spinning reels and 30 paylines. Players can opt to play just a single line, or they can add lines in increments of two all the way up to 27, at which point lines 28, 29 and 30 are added individually. The small coin size is .02, and the large coin size is 1. The game also allows the player to choose one to five coins per line, so bets range from .02 to 150.

Play is rather straightforward: Set the coin size using the Choose Coin UI element, set the coin count using Bet Per Line, set the line count using Select Lines, and then click Spin to start the round. Alternately, players can use the Max Bet Spin button to set the biggest bet possible and then the auto-start the round. There’s also an autoplay feature that lets you automate five to 100 spins at a time.

Check out the payout table below to understand how to win:

Once Upon a Time Paytable

Once Upon a Time Special Features & Bonus Game

The dragon symbol doesn’t have a standard payout and exists solely to initiate a wild reel, which occurs when the symbol hits on position one of reel number three. The dragon ignites all of reel 3 and making it wild. The wild reel applies immediately to the current spin, and it remains for the subsequent spin.

Whenever a knight symbol and a princess symbol land adjacent on one of the first three paylines, they’ll kiss, which will net you an instant credit win, the value of which is based on your overall wager. In addition, three tree house symbols on an active payline initiates a free spins mode, and three gold sacks on an active payline launches an on-the-reels instant-win click-me game.

Both the goblin symbol and the knight symbol serve as bonus symbols. Three goblins on an active payline launch the Goblin’s Treasure bonus round. In this bonus game, the player may select 3 among the 4 treasured items, each item being worth a certain number of credits. Choose wisely!

Three knights on an active payline launches the Save the Princess bonus round, which can pay out more than the standard jackpot. In this main bonus round, you get to select your weapon – either a war hammer, catapult, sword and shield, or a juicy steak – and then challenge the dragon to save the Princess. I chose the catapult which launched a boulder and struck the dragon in the head, knocking him out! Pretty funny! 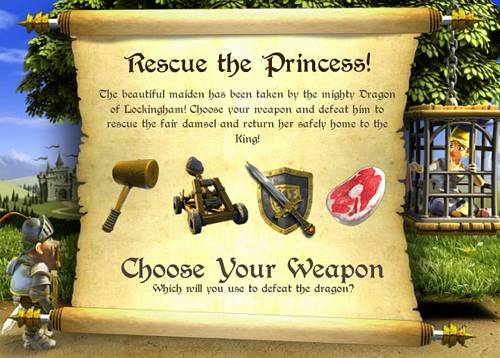 As you can see, Once Upon a Time has a lot of things going on. There are a lot of special features, fun animations, and two bonus games that can be hit regularly. The casual player seeking a fun slots experience will have a very good time with Once Upon a Time and can hit on some impressive wins.