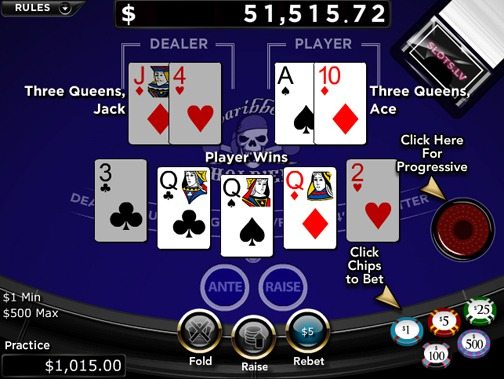 Welcome to the world of Caribbean Hold’em, where the stakes are small, the pots are big and the progressive jackpot could have you holding an impressive stack of cash.

Learn how to play Caribbean Hold’em today and prove that you indeed know when to hold’em and when to fold’em.

Caribbean Hold’em Poker is a version of Texas Hold’em that’s played between a single player and a dealer.

The minimum bet is $1, and players can wager as much as $500 per hand. The dealer deals two facedown cards to himself, two face-up cards to the player and three community cards. The player can then fold or raise the bet up to twice the ante. The dealer then deals two additional community cards, and then the game determines an outcome. This game also has a progressive jackpot, and the player wins that pot when a royal flush is dealt to him with the opening five cards.

Register and Get Your $22 Free!

HOW TO PLAY CARIBBEAN HOLD’EM

First, the player must choose their wager amount, ranging from $1 (minimum) to $500 (maximum), and then click the Deal button. Both the Player and the Dealer are dealt two cards, face up for the Player, face down for the Dealer. These cards are known as pocket cards. This is followed by three community cards dealt face up in the middle for all to share, called the flop. The Player raises by placing a bet that is twice the size of his ante if he thinks his hand is better or folds if he thinks it isn’t. Clicking Fold forfeits the ante. Two more cards are dealt to the flop. Some or all the cards can be used to make the best poker hand possible.

Whoever creates a better five-card hand wins the game. A player’s Ante is paid 1:1 and the Raise is paid according to the quality of the hand. Players should keep in mind that the dealer must also qualify by having a pair of 4s or better. If the dealer does not qualify, the player wins the Ante and the Raise is returned to as a push.

Hands are ranked according to standard poker rules.

Just like Caribbean Stud Poker there is a lucrative progressive jackpot to be won if a player wagers an extra dollar on the Progressive Coin Slot before pressing the Deal button at the beginning of the game. Caribbean Hold’em progressive payouts are based on a five-card poker hand that is made using your first two cards and the flop. If the player doesn’t bet an extra dollar, they won’t be eligible for the progressive.

Only five hands qualify for the progressive jackpot:

Deal – Used to start the game after the player has placed a bet.
Raise – Used to make an additional bet that is twice the ante. In the downloadable version, click on the Call button to double the ante.
Fold – Used to forfeit the ante and end the game.